Well and truly the workhorse of your turntable, when it comes to phono cartridges there are basically two types to choose from - Moving Magnet (MM) and Moving Coil (MC). The debate on which is the better choice has raged for years. While both have their pros and cons, audiophiles do tend to favour the moving coils. Which one of those is best?... Well, thats opening up a whole other can of worms...

The first key thing to do is find a comparable cartridge to your table. There's no point, for example screwing a £50 cart onto a £4000 table, and vice versa. While we don't suggest selling a kidney or re-mortgaging your house for one of these, we do urge you not to simply skimp when it comes to your decision. Think about your choices and always go for the best your budget will allow.
The second key thing is the cartridge's setup. If you've got yourself a relatively cheap setup and have sprung for the relevant tools (scales, protractor etc - stay tuned for our setup guide), then by all means try yourself. Take your time, follow the instructions and if you're unsure about anything ask at pro. Alternatively get a pro to do the whole lot for you. While this is quite ideal and should be an option proposed to you when buying your rig, it doesn't help you much when it comes to maintaining it.

Moving Magnet - In a moving magnet cartridge there's a tiny magnet resting on the end of the stylus cantilever inside the cartridge's body. This magnet is suspended between two coils, one for the left channel and one for the right. As you may have deduced the magnet moves between the two coils inducing a current in them. Since the magnet is so small it weighs very little, therefore requiring slightly more downforce (tracking force), which isn't ideal. But what a MM lacks in sound reproduction to the MC they make up for in a couple of areas - namely price and the benefit of having a user replaceable stylus (in many cases). 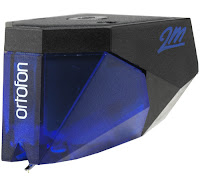 Like most of Ortofon's ranges, the 2M is available in 4 models - Red, Blue, Orange and Black, with their price increases in that order. Highly praised by all and sundry since their arrival 5 or so years ago, all four models have proved to be excellent value for money and highly versatile. Which ever model your budget allows for can be expect to perform above and beyond its price bracket. A regular and not to mention perfect choice for newbies or veterans alike.

Goldring ~ G2100
The entry model to Goldring's 2000 series of cartridges, the 2100, much like the 2M performs well above it's price tag. It's ability to capture the most tiny musical nuances with its elliptical diamond stylus has earned this little beauty quite an array of 5 star reviews.
Beautifully styled to boot, the 2100 is fantastic option for upgrading any budget turntable. 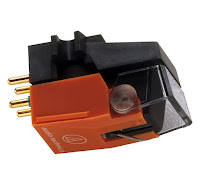 Audio-Technica ~ 120E
Doing the round for well over a decade now the 120E is a fantastic cartridge at an incredible price. If the purse strings are tight and you have little in the way of budget but don't want to completely sacrifice quality then this is certainly one for your consideration.
With a never ending list of happy customer reviews this plucky little offering has proven its worthiness time and time again.

Moving Coil - Where in the aforementioned cartridges it's the magnet that moves, in a MC, you guessed it, it's the coil that does all the shifting. Using a similar principle to the moving magnet, here it's the coils that are attached to the stylus cantilever and instead move beside a stationary magnet. Because of the magnet's close proximity, the coils use extremely fine wire which in turn causes the output voltage to be extremely low. Much lower than that of a moving magnet cartridge, which is why some additional amplification in the form of a seperate (or at least MM to MC switchable) phono-stage is required. While this may serve as another expenditure, the low output of a MC works wonders in eliminating potential pops and squeaks from an LP.

Denon ~ DL103R
This flagship MC cart was originally conceived in the 1960's through a joint venture between Denon and the Japan Broadcasting Corporation. Since it's first conception it has blazed a trail for everyone else. Over five decades later the 103 is still going strong. Maintaining a diehard fanbase, it's quality and reliability have never dwindled and it still remains a firm favourite of audiophiles the world over. For a moving coil under £250 ($320) there are very few other options that can step up to the 103's plate. 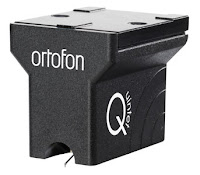 Ortofon ~ The Quintet Series
The world's leading cartridge manufacture's latest moving coil offering. Just like the 2M series the range incorporates the companies standard four colours, ranging in price. While arguably not quite as attractive at their fellow moving coil Cadenza range they're resulting quality is easily on par and with the entry level red version priced at around $320 they're an excellent choice for anyone looking to up their game from a moving magnet. 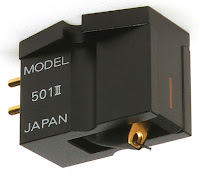 Shelter ~ 501 mkIII
We saved the best till last.
Arguably the best value for money moving coil on the planet. Japanese company Shelter have been manufacturing the 501 model for well over a decade now, and this latest incarnation has improved on an already excellent and revered product. Pleasing even the most ardent of critics the 501 had won praise after praise and boasts a plethora of 5 star reviews, with most boasting that you'd need to fork out twice as much if not more to come close to beating it. A true giant killer.