Just In Case You Missed It Earlier

Tripping the Mechanism ~ Start the Evolution (2011) 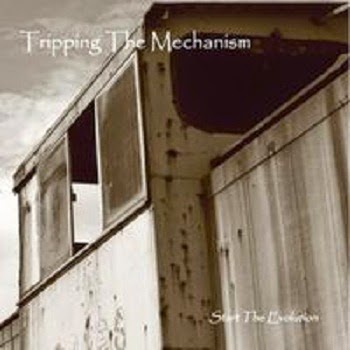 A couple of Saturdays ago I made my way to a local Stoner/Sludge show downtown, I was running a little late but was undeterred in the quest of my fix for a good show. As I parked and got to the front door I could tell the first band was already into their set, after getting in the door I could hear the band unhindered and they were crushing, in a room adjacent to the stage and separated by a wall I could still feel the concussion from their music deep in my chest as they leveled the place with what I would soon realize was the last song of their set. As I got my beer and walked around to the stage area and see the band tearing down their gear, I turn to walk back outside and wait for the next band when a nice lady that turned out to be Tripping the Mechanism's booking manager commented on my back-patch, as we got to talking I mentioned that I missed just about all of the band's set, but really dug what I was able to hear. I explained to her that I wrote album reviews for this fine blog and that I'd like to cover something by them if they were interested, before long I had a promo copy of their album tucked away safely in my pocket courtesy of the guitar player/vocalist. After the last band finished up and I made it to my car, put their disk in the player and started to make my way back home, I was barely out of the parking lot and I had to turn the volume up because from the opening moments until the closing the album is an animal trying to claw its way through your speaker, and I wanted to let it.
Even though it is a few years old now, I fear most of you fine Sludge Metal connoisseurs have missed out on this gem so far. Tripping the Mechanism is a three piece Sludge Metal band from South Carolina, with a vocalist of each gender and their particular style of music it's easy to draw comparisons to a band like Kylesa, but they manage to sound even darker, closer to Kylesa by way of Crowbar, if anything. With two quality vocalist having wide enough ranges that they can pull off everything from the harsh vocals to the clean, their possibilities are pretty much endless in that department. The guitar has a thick and sludgy tone with rays of Death Metal shining through, brighter at some points than others, but almost always present in the siege of heavy riffs you're accosted by. The drums are well done, always swinging and seeming to punch through even the loudest parts on a track to be heard. The bass tone is fat and crushing, rumbling it's way through the album, but often kind of subtle and sat back in the mix, once you pick the bass line up and start following it though, you won't be able to stop. All three musicians are talented, they've honed their craft like a soldier hones his tactics, and with much the same result, only instead of successfully knocking off an enemy combatant, the band slaughters these five tracks of raw but exquisite Sludge Metal. The track I got into the most, and not just because I happen to be a Lovecraft fan, was "Dunwich Horror". With its crunchy, plodding guitar opening it's not long before the guttural vocals are snarling at you, the massive sounding guitar riff drops in along with a slamming drum rhythm, all backed up by a rather funky sounding bass line that reminds me a bit of Les Claypool. Around the halfway mark things begin to change, the track's ebbs and flows becoming apparent, taking on a more melancholic feel with everything slowing down a bit and the bass taking on a much darker tone. The bass player's vocals resume softly, gaining an enchanting but still slightly gritty and soulful edge for a time before returning to their original, shouted and harsh position.
If you're like me and have missed this the last few years, go ahead and hop on the bandwagon while the getting is good. They're set to record a studio album and a live album over the rest of the year, so looking forward to those and I'm sure this won't be the last we hear of this band. You can pick up CDs and any other merch you may need directly from the band's website, or snag a free digital copy on their bandcamp, but as always, if you like the band, go support 'em.
~Skip


For Fans Of; Kylesa, Acid Bath, The Melvins