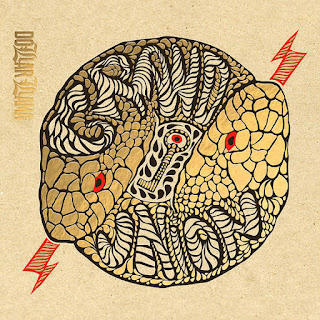 Dollar Llama's new album, their first since 2009's Under The Hurricane, starts off with an explosion of drums and guitar, raging right out the gate and setting the bar for the rest of their slamming set-list.  There's plenty of swaggering attitude carrying the songs, which often go with a steady-rolling beat as the vocals are howled, and things generally move too fast for any sort of gloom to overshadow the sense that these guys will do their best to beat the hell out of any problems they might encounter.  Major song shifts come most prominently in the form of big ramp-ups highlighting the beastly technique of the drummer playing against quick-picked guitar (check out an example on the streaming title track below), with a small number of samples sewn into some of the songs to nice effect.
The latter half of the album goes a little heavier on average with its songs, culminating in the ~7-minute "Noisecreep", given a run for its money by preceding tracks "Almighty Red" and "Alpha Blood", and while Dollar Llama steadfastly hold on to their beat-storms and yelling, the doom seeps right in with very little trouble.  Whichever side your preferences fall, Dollar Llama have done quite well by themselves with this one.
~ Gabriel

For Fans Of;    Queens of the Stone Age, Slamphetamine, Buitre Humano, Iron Tongue, High On Fire