Mysteries Of The Wyrm... 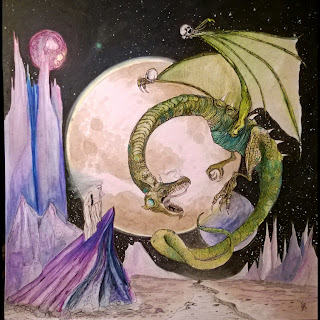 Right from the start, there's a classic doom charm to Book Of Wyrms' demo, one that plays right into the minor roughness of the mix.  The vibrancy of the band's bass, drums, guitar, and vocals benefits from the slightly lo-fi acoustics of the recording style, making it clear that their magic happens before production tricks, and the strong bluesiness of their riffs at times only plays more to their earthy sense of doom metal.  Wild tangents emerging from over-grown riffs leads to some spectacular displays, particularly in "Sourwolf", which brings in either some keyboards or a special pedal for some ringing trills against the slow-growling bass as it doubles back on the main several times.  Praise also goes to the vocalist, Sarah Moore Lindsey, whose sweetly smoky timbre lends an extra eerieness to the lyrics of destruction.  Three tracks long, but with each one well-worked and solid (and edging up on 10 minutes), the showing put in by Book Of Wyrms is an impressive offering worth checking in on, especially for fans of doom with a slight psych edge.
~ Gabriel

For Fans Of;    Church of Misery, Demon Head, Jess and the Ancient Ones, The Munsens, early Windhand