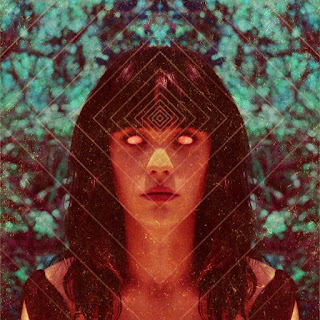 Witchtripper make their debut on this EP with a succinct description of their musical approach, worded on their BandCamp page as "HEAVY // FUCKING // METAL".  True to their word, the group delivers doom metal with some deathly vocals and guitar liveliness, slipping in a well-chosen film sample to start things off and accentuate the stoner patina fuzzing up their bass and riff-style.  They bring the attitude of sludge (especially on the second track, "Agony"), but with most of the griminess confined to the vocals as they're rasped and spat out over the beats and feedback.  Imagine an angrier version of Electric Wizard's more nihilistically-inclined lyrics as the animating force, and you're in the right county.
There's friction between these Frankensteined genre elements, but the EP generally runs without too many bumps in the wrong spots.  There's a classic modern doom feel to the bass' parts of the songs, but its riffs run a bit too repetitive with the need to defend its musical territory against the invading guitar and vocals; respect goes to the drummer, who plays to each of the sides with a well-rounded presence.  The closing title track feels like the most natural fusion of the music's pieces, but there's the caveat of it being an instrumental piece.  While it feels less crowded without the vocals, the singer had put so much honest passion into his work that I felt somewhat put-out by his absence.  There's lots of promising possibilities to be heard in the songs, though, and whichever side(s) they decide to emphasize in future recordings, it seems likely to be some similarly strong stuff (probably with haunting artwork to boot).
~ Gabriel