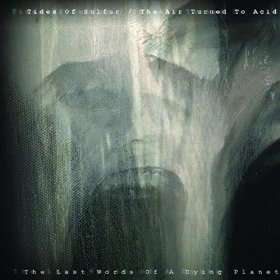 The two sludge bands on this split both hail from the UK, with Tides of Sulfur being a trio that started out together, and The Air Turned To Acid coming together from various groups.  Tides of Sulfur take the A-side with their two tracks, "Lord of Flies" and "Crawling Through A Pit of Ash and Bone", with the first coming in at just under three minutes and the latter stretching out to over seven.  Starting out with the usual sludge tones and tempo, "Lord of Flies" quickly revs up to a harder and punkier modus operandi, with rasping yells, bludgeoning drums, and near-vibratory guitar work tearing over the relatively calm bass-line.  A quick but decisive drop-off with a yell of the title, then it's on into their second track, where the raspy vocals are joined by some cleaner work, the tempo is pulled back down to more traditional sludge speed, and the band turns out some very solid work with a number of surprises waiting to take unwary listeners by force.
On TATTA's side, "Sisyphus" starts them out with all the grinding heaviness you'd expect from that title.  Rough growl-howls are emphasized by the drummer's bashing, the guitar and bass churn together in low-tuned stewing, and the riffs are never held for longer than they need to be.  "Glandroid" brings in a little more thrash flavor to the riffs and execution, with a cool chunky progression serving as the refrain before things disintegrate into violence.  FHED will be handling the split's release with a limited run of 50 cassettes, so if you're a fan of the really nasty sludge in which the UK's been specializing recently, and tapes are a format you can use, snap one of these up before the supply runs out.
~ Gabriel

Email ThisBlogThis!Share to TwitterShare to FacebookShare to Pinterest
Labels: FHED, Sludge, The Air Turned To Acid, Tides Of Sulfur, UK