Oh, I've been looking forward to this... 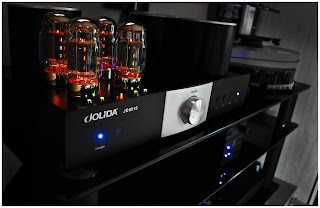 I've been itching to get my grubby little mitts on a good valve amp for a long long time, but not only are you faced with a sparse number of manufacturers actually producing the things, when you find one you're more than likely looking at either Quad, which you will inevitably have to sell a kidney to even afford a mere glimpse of or something along the lines of a Fatman, which do look the business but really fail to cut the mustard on a high end scale. So this is where Jolida comes in. They may not be the best known manufacturer on the scene but goddamn they make some amazing bits of kit, and this review will be focusing on their flag ship KT88 valve model the JD801S.

So why a valve/vacuum tube amp? Well a couple of reasons really, one - Their distinct warm sound. Its beautiful and it goes hand in hand with reason number two - They're old school. Retro if you will, and retro is good especially if you're a lover of the classic format that is vinyl, and as you all know... I am. There is also the fact that they are, and that goes double for Jolida's models, painfully good looking. As you can see.
Obviously this beauty will only get you so far, the proof is of course in the listening. So I hooked it up to my turntable via Pro-Ject's Phono box USB V and also my TV. I deliberated on what to christen the amp with and quickly decided to go 70's and broke out ZZ Top's Rio Grande Mud. Straight from opening bars of Francine everything feels utterly perfect. That warm tone just perfectly harmonises with that old 70's rock sound. But this was bound to be the case really. So what about something at the other end of the genre spectrum? Now for Agoraphobic Nosebleed's side of The Poacher Diaries... and once again the JD801S doesn't fail to satisfy. But I didn't stop there, subjecting the amp to the likes of Jefferson Airplane, Isis and Soilent Green before moving on to the TV and cranking the volume for Ironman 2 and Battle Royale. Despite all my attempts to draw out a weakness I just cannot fault the performance of this machine. Wether it's screaming vocals and pounding drums or gun fire and roaring jets, everything sounds like it was made to be channeled through this thing.

So thats the sound covered, what about the build quality and practicality? Well Im glad to report that no expense has been spared on the build here. Everything feels solid and well crafted, from the volume knob to the gold plated connections at the rear. The thing feels like it could withstand a nuclear blast. A quality that these days has truly become a rarity, even in the high end market. In fact its something I've not really seen since inheriting my dads 30 year old Aiwa amp some years back. Naturally this quality comes with a weight and the JD801S does weigh in at a whopping 24kg. Yes, yes this is heavy when you compare it to you're standard solid state amps but given that tubes require their own transformers, this is a pretty standard kind of weight for an amp of this kind. But its a small price to pay, I'm sure any valve amp owner would agree. 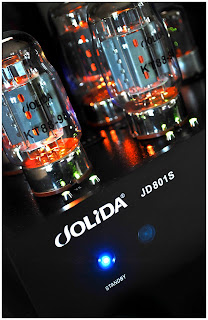 So looking quite impressive so far I think, but what about short falls?... Well this took me a while to contemplate. I've been wracking my brain for the last few days, but I honestly could not find any issues which relate to this amp in and of itself. The only weaknesses are that which are inherent to vacuum tube amps and have been since the dawn of time - The tubes get hot. Very hot. So needless to say they need ample space and ventilation. The other downfall is again related to the tubes. Vacuum tubes just like their cousins the light bulb, do have a life. Once they are gone they will require replacing and that can set you back (for a single KT88) anywhere between £60 -£120 ($90 - $180). But fear not, with the right care and providing you don't have them running all day everyday you wont have to be doing this every other year. Jolida have also been able to make life considerably easier when it comes to setting up and caring for your valves. Where usually you are required to dig out a meter and clarify the 'cruise' current flowing through each individual valve and set it to a correct value, the guys in the Jolida labs have devised the 'easy bias' system. In laymen's terms this means all you are required to do is turn a simple and most importantly, accessible screw until the corresponding LED is lit. Things don't get much simpler than that.

Now on to the most important aspect, the cost. For this JD801S their newest top model you will be looking at £1390/ $1890/ €1590. A big price true, but for this kinda of machine at this kind of quality it's a deal thats second to none.
But if the price is slightly out of your range don't worry there are a few other great options which echo the same fantastic build and similar style. Next down from this model is the JD505 which also uses the famous KT88's. Following that theres the JD303 which utilises the EL34 tubes and has recently replaced the JD302 model, which if any of you have seen the remake of The Mechanic may have noticed was part of Jason Statham's set up. Then they have the JD707A which has not only been revised for 2011 but is also available for around the £650/ $990/ €980 mark.