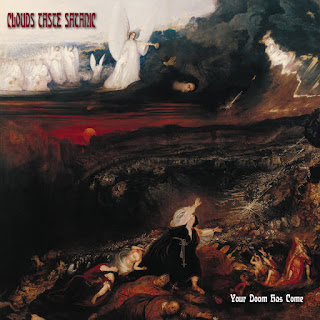 With their second album, Clouds Taste Satanic continue their established fondness for wrapping big doom tracks up in a classy presentation.  Unlike To Sleep Beyond The Earth, this time they're having a go at breaking the music down into more than one song per side, with six pieces coming together to provide as much as can be squeezed onto a single LP before the sound quality begins to suffer.  The slow procession begins with "Ten Kings", setting a foundation of thumping riffs and reverb before shifting into more violent mannerisms.  There's a more staunchly metal bite to the songs, with the post-rocky pieces of the first album switched to a more sinister tone this time around, though the eagerness shown by the band in exploring ways to keep the song-writing fresh hasn't diminished one bit.  Whether slogging through a slow'n'low riff section or bashing out some less-tethered frenzies, CTS show a good sense of how far they can stretch a piece before it starts to fracture and cut into the next portion.
As much as the band has changed their approach from the first album, there's an appreciable sense of how lessons learned from its construction influenced this one; the care for filling each side not just with track after track, but to give it a satisfying experience to itself, for instance, with the rising momentum of the A-side crashing into "Beast From The Sea" for the climax, and "Out of the Abyss" climbing inexorably back up to those heights and beyond until "Sudden...Fallen" returns to destruction.  The numerous bridge segments of CTS' debut have their own updated incarnations, with condensed versions of their changing choruses providing punchy palate-adjustment, and each of the musicians is on-point with their performances, precise and powerful.
From the evidence of Your Doom Has Come, Clouds Taste Satanic have far less interest in simply getting by than in challenging themselves to always improve, and I fully expect that whatever comes next will have just as much in the way of new angles.  You'll have to wait a while to hear it for yourself, as the release is scheduled for the 1st of September, so mark it on your calendar and set aside some cash to prepare.
~ Gabriel