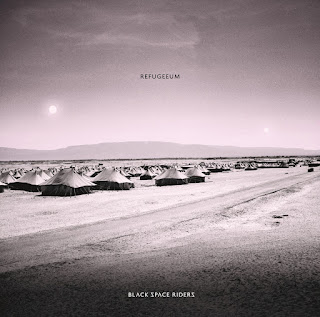 I've been following Germany's Black Space Riders for a couple years now, and they've always done one thing really well, that's playing heavy, psychedelic space rock. This time around though, things are just a little different, with the music losing some of that optimism and light that's present on their other albums. Instead, you're presented with a much more jaded world view, but with the state of current affairs, who's to say it's undeserved? Nothing gets off to a roaring start, relying on atmosphere to get their point across rather than blunt force. Once things get rolling though, even their riffing isn't that heavy handed, but probably more effective than if it were. Instead of beating you up, they'd rather talk you into beating yourself up, and the only downside is that they're good at it. It's not all mellow though, with each song having peaks of high energy, with gritty guitar riffs that give way to long, cosmic sections. Then there's two vocalists, each with their own dynamic that they play off one another with. My favorite track so far has been "Run to the Plains", opening up with a slow guitar line, and some softly sung vocals while the drums barely make their presence known, with only a cymbal rhythm. After a minute things have picked up a bit, with the bass guitar making itself known, along with the drums worming their way into the mix more and more until it's a main driving force. And with this being the longest track on the album at just over eleven minutes the band has no need to rush, so they don't. It takes about three and a half minute just to reach the first peak, and it doesn't take long to start a descent down the other side once it's over. As with pretty much all of their songs though, it won't be the only peak, with another roaring guitar section just a couple minutes later. Things really don't slow down or start to taper off until the nine minute mark has passed, from there it slowly runs down to the end of the track. With the album not out until July 24th, there are some pre-order options available on their Bandcamp, including some colored vinyl and a cd. This album is quite like anything you've heard before, unless you've heard Black Space Riders, and even then you haven't heard "Refugeeum".
~Skip