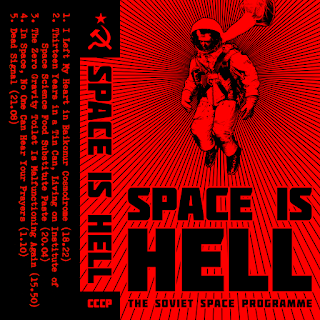 This first release from The Soviet Space Programme carries a bit of a story with it, as the five tracks it contains are framed as the last transmissions received from the first human sent into space, shortly before an error sent him on a course out of the solar system.  Whether or not you want to believe that, the setting it creates for the music fits well, as the sounds of heavy resonance, rushing power, and isolation-enforcing studies in feedback all cluster around the sensation of being trapped in a piece of complex machinery in which something important has broken.
The track titles go a long way in adding to the album's central concept, with names such as "Thirteen Years in a Tin Can, Living on Institute of Space Science Food Substitute Paste" and "Dead Signal" (the closer, of course) sliding right into the oppressive vibrations from the amps.  That's helpful, as those vibrations and some synthesizer-generated beep patterns are most of what there is to be found in Space Is Hell, aside from faint and distorted speech (in a language my uninformed ears are completely willing to accept as Russian) providing a strikingly calm contrast to the mutations of the drone-tones.  Depending on your feelings about feedback exploration, it'll likely either hypnotize you or drive you up a wall, with the short interlude of "In Space, No One Can Hear You Pray" and the silence after the brain-melting final track offering the only release to be heard.  If you want to take a space-trip (or terrify someone who's in the middle of one), just put on Space Is Hell at high volume; a limited run of 50 red cassette copies are available now, for the price of £6.66 apiece, with digital through BandCamp.
~ Gabriel