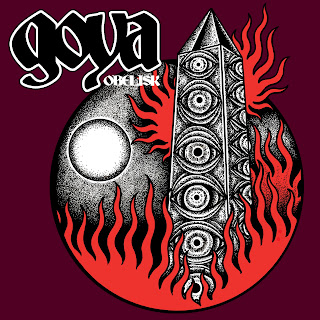 Goya have been keeping themselves busy since the release of their first LP, with a split and a single on STB Records and the 3-track Satan's Fire all coming out this year.  Now that their second album is arriving (first on CD and cassette, with vinyl coming a couple of months later, all of it so limited that you'll need to scramble or be left in the dust), it's time to check your lighter's fluid levels and crank your speakers once again.  The album starts off with the A-side from the previously-mentioned single, "Nothin' But Dead Stuff", a thick cut of heavy fuzz and chunky riffs perfectly suited to christen the band's return trip.  A cacophony of drums and strings roaring about as vocalist/guitarist Jeff Owens blares out "I wanna hear you scream!" jumps from there into a psychedelic bridge that squirms like there's worms crawling in the pedal-board, ending up with a hard punch of sound to cap the entrance.
"The Devil's Prey" is the first of the three or four 'big' tracks of Obelisk, and its heavy psych doom low-end fiesta gives a taste of the madness the album has up its sleeves.  Darker than early Black Sabbath's interludes, but with a similar rough-edged skill, "The Star" pops out as a disarmingly melodic breather before the title track, which slams past the minimum heaviness needed to earn its name, and just keeps going off into the stars.  Hearing the band tear loose with the guitar-shredding, feedback, and drums as the bass steam-rolls the way is enough to over-rule the usual pace of psych doom in favor of 'fuck it, let's go fast,' and "Obelisk" makes one Hell of an argument in its favor.
"300 Eyes" picks up some of the country twang of goofy B-side "I Might Be High....", but swaps out the comedy for a somber (by the album's standards) acoustic guitar dirge as the vocals rise and bloom, expanding the pared-down melodiousness of "The Star" into a lush oasis.  As "The Sun" bursts in with its high-speed explosions, the psych takes over again, then bounces back to stern doom for "Beyond Good and Evil", combines the three for "Echo from Space", and rockets off into "No Place in the Sky" (reworked from its version on the Wounded Giant split) for a perfect culmination in the finishing track that'll take up the D-side by itself on vinyl.  It's a magnificently-assembled album, with the performances ranging from nailed-down to wild abandon in pleasing proportion, strong riffs throughout, and a real mean edge to it all.  Damn good stuff, and the full album is up for streaming on Goya's BandCamp, so start listening and mark August 1st on your calendar.
~ Gabriel