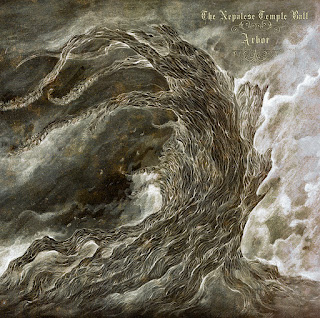 With their new hour-long album, The Nepalese Temple Ball make a thoroughly impressive debut, establishing their musical character with songs that go deep while staying sharp, coaxing swampy bass and piercing guitar-work into a strong alliance from the opening salvo into the following siege.  The vocals likewise mix it up with multiple methods, though the usual is a strident stab somewhere between a growl and a blackened howl, while the drums provide what may be the album's strongest source of variety, flipping in an instant from one toothy rhythm to the next basher.  There's also some subtle synth effects and a few other electronic polishes, though always with a restraint suitable to the songs.
As well as each part stands when considered on its own, it's in listening to the way the band joins them all together that the gold really shows.  They're careful to give everyone their share of the song, without making it seem divided or over-structured, though the twists of the songs suggest long work figuring out the best flow.  Trying to figure out which song to include as the streaming track was more difficult than usual, as you might guess from my gushing this far, but given how good a hook the surging power of "Desert Baron" had in me, it seemed like one of the top options for introduction.  Give it a listen, get the whole album, listen to it start to finish, and see where you're at then; me, I'm giving this an early pick for the year-end Top 20.
~ Gabriel