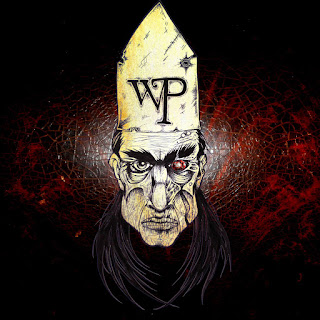 The first album to emerge from the Bristol-based crew of Warrior Pope is a single half-hour-plus track sharing the name of the LP.  Currently digital-only, the band is taking note of how much people pay for the track to determine whether to go CD or vinyl with the hard-copy release, so be sure to click over to their BandCamp page to help point the way to your preferred format.
The music isn't only big in duration, rising from a single drone-tone into increasingly-complex chords with added layers of percussion and other modes of expression.  Furious bursts of shredding weave up out of the calmer material in short order, hitting a cool pitch between directness and technique, the big riffs come out swinging hard and connecting, and the band's way of handling the mood-swings in the song builds very effective tension.  There is a clear sense of the thing having been Frankensteined together, but the bridges tying it all together hold strong to enhance the diverse skills of the players.
While the band describes themselves as coming from a drony stoner doom base, and there are some nice rips of guitar feedback put to use, but the song's best strength (to my ears) is how fluid the music is at times.  Warrior Pope's performances shine, with the album landing solid in its own right and as a first step.  Should the album make it to vinyl, it feels like that new split in the middle will do it some good, because as much as I enjoyed the way the track took hold of me for the ride, it was difficult to think back to individual sections.  The trade-off of getting a minor interruption to keep the early stuff from being so deeply buried by the rest doesn't seem too bad, and there's so much hard work and style put into the track that it all deserves recognition.  Give it a listen, throw some money at the band if you can, and enjoy.
~ Gabriel