Darkest Psych From Down Under... 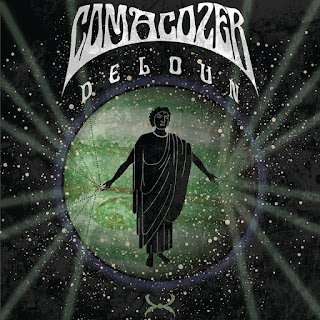 Combining the two previous EPs from Comacozer into a single vinyl release, Headspin Records is giving you a little taste of what's to come from the Australians. Who already have the plans in place for recording and releasing a brand new LP. If you've never heard the spaced out, dark psychedelia that this band exudes, then this is the perfect starting point. The band puts down mellow and heavy grooves that always incorporates a sweeping undertow at some point in the track. Like with "Nebula Dawn", the song starts off cool and relaxed, within a couple of minutes the listener is drowning in swirling guitar fuzz tones and the crashing waves of drum rhythms. After opening up with an airy guitar line that floats along for a couple of minutes is joined by the rest of the band, filling the depth of the sound with mass amounts of fuzz and distortion, backed with a rumbling yet subtle bass line, and strong, steady drum parts. It adds a heavier dimension to the song while still retaining the spacey ether vibe that dominated the first minutes of it. The final five minutes drive forward in that same way, seemingly drawn by the gravity of an immense celestial object. Now, if all of this sounds intriguing to you, you're not alone by any means. With vinyl pre-orders going on there are only a few of each variant remaining, so if you have plans on getting one it wouldn't be the best plan to wait until the September 1st release date.
~Skip

(Ok, a small pretext - I hadn't realised Skip had already covered these guys and having had the LP just turn up I felt compelled to put my two cents in, so heres an update)

It's been a while since I've discovered some good old space rock, which lets face it, is a bloody sacrilege. Having recently rediscovered both Dozer's and Nebula's back catalog I've had an unquenchable yearning for more. So Australia's Comacozer couldn't have really appeared at a better time for me. Having to wait for the infernal snail mail to deliver me this album on delightful green wax was truly a trial. Alas, it has appeared and I can finally give this thing the maiden outing it deserves.
The album itself is split into two, Deloun and Sessions, with nearly a whole year between the two recordings. Amazingly enough, with prior knowledge you'd never really guess. More importantly, the pace remains consistent and the album plays through flawlessly. Something even some of the most seasoned bands would be album to pull off. I don't know whether or not the recording was especially mastered for vinyl, but goddamn it sounds fantastic! Comacozer's mix of classic space rock and dark instrumental psych create an atmosphere that you could physically bathe in. Sure, you could just sit in front of your computer and let iTunes go through the motions, but that really wouldn't do Deloun justice. No, for the full physical effect, knock all the lights off, spark up a fat one and lie on the floor between your speakers. Now, if you can also swing by Ikea and pick some of those colour changing led lights then you'll really be in for a treat. I've no doubt a skylight at night would be even better, or hell, just being outside. Unfortunately I don't have the first, and as for the latter - it's currently November in England, you do the math. But if you can get most of these elements in place I've no doubt that you'll have a dopey smile on your face before the opening track Cosmic Hypnosis begins to fades out. The thick bass lines and psychedelic licks really do draw you into a hypnotic like state and proceed to crash over you like waves of psilocybin.
~ Jay