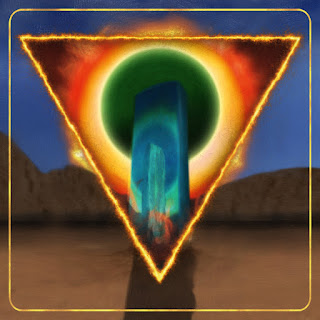 Much like Sweden, Greece, and a couple other countries around the world, Spain seems to be in the middle of a boom for quality stoner and psych rock bands at the moment. One of the latest to come from that part of the world is Crimson Stone, having just released their self-titled debut about a month ago. And as far as debuts go, it's as solid as any this year. High energy riffs, lots of fuzz and distortion with a little retro 70's flair for good effect, and a constant groove are just a few of the high points on this album. They keep things simple, in that there's no grandiose experimentation or artsy filler stuff, just heavy handed rock and roll done right. The album's best offering for me was the track "Pessimist Boogie", kicking off a little slower, and a good bit darker than the tracks before it, and really even the ones after it on the album. For what it relatively lacks in the energy department, it makes up with sheer emotion and intensity, leaning towards the bluesy doom side of things more than the psychedelic side on this one. Once things get rolling in the track, things are constantly moving up and down, from crushing high points to the smothering lows and back again. Just as with any of the other songs though, there's always groove, even if it's a bit slower and distended this go 'round, it's a dark groove that infects the track. You can grab this and the other ten tracks for just a few bucks as a digital copy, or a CD directly from the band.
~Skip


For Fans Of; Greenleaf, The Gentlemen Bastards, Ape Machine