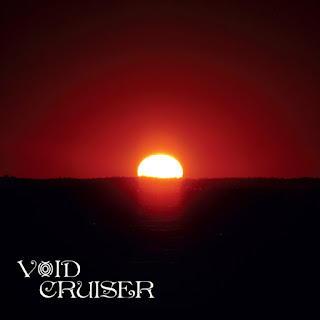 It's hard to accuse Void Cruiser of rushing things; since forming in 2011, they put out an EP two years later, and two more years on, their first LP has arrived.  At ~40 minutes, it's ripe for a vinyl release, though there's not yet any announced plans for that, and the band's rugged sound has just enough polish on it to slip into unsuspecting ears and take control.  Heavier than your usual desert rock, and with more of a psychedelic edge than the short-hand of 'stoner rock' generally implies, Void Cruiser revs through the eight tracks (three of which are revisited pieces from the EP) in clouds of dark smoky feedback cut through with gut-punch riffs and white-knuckle tear-offs.
There's an attention-getting melding of traditional grooves and targeted jabs of out-there wildness, like the injection of tambourine into "Heist" or the sudden wash of extended tones matched against rippling percussion in "Amoeba", and Void Cruiser carries it all off with an air of cool & casual madness.  There's more than enough variety and depth to the songs to give listeners new things to notice and enjoy each time they pop it on for a play, with attitudes ranging from offering a strongly-scented hug to being liable to brain you with the nearest heavy object to hand.  Take the bruises with a smile as you check out the album, and know that it's just the way Void Cruiser like to play.
~ Gabriel