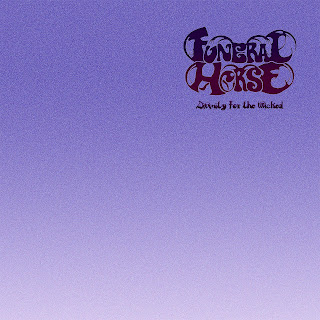 Armed with a new drummer for their third album, Funeral Horse return to their stoner/punk/doom buzz with confident thrashery from the get-go.  "There Shall Be Vultures" establishes the base for listeners who are new to the band, with the three-piece's dynamic of bass/drums/guitar and distorted vocals laid out in relatively simple fashion.  After the ground-work is done, the band moves from there to more elaborate constructions, beginning their rambling trek with the expansive acoustics of "Underneath All That Ever Was" at cruising speed as the various mechanics of the song get their inspection underway.  "A Bit of Weed", playing as a possible nod to Weedeater, cools down even more as an acoustic guitar-driven intermission before turning up the dials for size and attitude in the four remaining songs.
"Gods of Savages" is the first of these tracks, which have enough craggy grandeur to put me in mind of crumbling desert temples, thanks to flesh-ripping edges hidden in the rock arrangements and a sense of buried but dangerous mysticism to the moody alternations of fierce and floaty.  "Yigael's Wall" feels like the song most suited to the band's older Heavy Metal-styled logo, with a "Planet Caravan"-like world-weariness and fondness for just coaxing sweetness out of the strings offering soothing licks when the song's not jolting into its circle-pit roll-riffs and vocalist Paul Bearer's yells of encouragement.  A ramp up to head-banging guitar freak-out closes out the song with a burst, and "Cities of the Red Night" picks up as a hybrid of the previous song's space desert vibes with the easy-going exploration of "A Bit of Weed" as dusk falls on the album.
"Gifts of Opium and Myrrh" brings that end sooner than I imagine many listeners will want, as the album feels like just a quick tour of the wild animals and wide vistas available to be put on display by the band at just a handful of minutes past half an hour.  Of course, that will keep those ears eager for the next release, and busy soaking up the fuzz and grit from this one in the mean-time, so it's hard to feel too put-off by the brevity.  A twisting feedback stretch to bridge the way (laid to rest with a burst of instrumentation that works best as a surprise) helps ease the journey's end, leaving first-timers to sit back and reflect on what an unusual one it was.
The album benefits from being played at higher-than-high volume, as there's what feels like a bit of under-play to the mixing, like a full-on rejection of the volume & compression wars; while that's great for the fidelity and depth of the band's characteristic analog crunch, it can also lead to things sounding tinny if not cranked to an appropriate level.  The band plays around enough with the sound of each instrument for a long-endurance run from their three-man arrangement, and though the times when the guitar goes on the attack certainly spot-light it, the bass and drums get their fair share of time and attention as well.  One to let grow on you over repeated listens, though the first time should have you hooked fast.
~ Gabriel

Funeral Horse - Underneath All That Ever Was (320 kbps)