Yellowtooth - Crushed by the Wheels of Progress (2015) 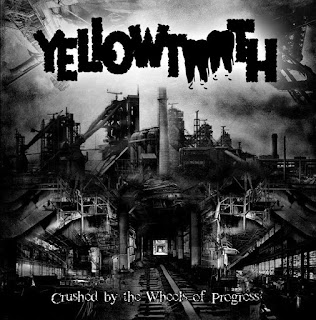 The new album from Yellowtooth begins promisingly enough, with a short dialogue sample leading into a gun-shot to start the games.  The first few songs to follow make use of Cookie Monster vocals, pounding drums, and difficult-to-differentiate guitar riffs, going for a combo of crusty punk with chromed-out metal that's too attached to old standards to sound genuinely rebellious.  By the middle of the album, they start to slow down and give the music space to resonate (as in the start and a few truncated measures of "Season's End", the break-downs in "Manifesto", and the feedback droning of the title track) or work up to high-speed instead of just hanging out there the whole time (well-evidenced again by "Season's End" with its solid crescendo), showing more-than-decent chops from the band.
The insistence on returning to the worn-out D-beat form over and over again makes for a fairly hard split on whether it'll win you over or have you soured by the album's end, around where the songs take on a slightly less-cluttered sound and the leads come through with more clarity, but beneath the covering layers of samey-sounding crust, the band puts in good work.  Start at the end and work your way back to the first songs if you need time to warm up to standard death metal vocals, but give the album a fair shot at crushing you beyond hearing just one track and deciding from there.
~ Gabriel

For Fans Of;    Dogmate, Buitre Humano, Future Leaders of the World, Sick Of It All, Necrophobic