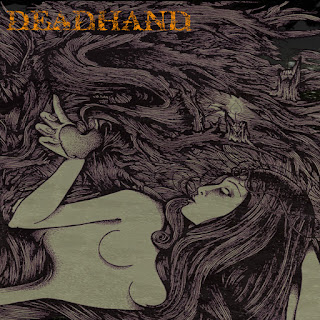 With an EP and a split (joined by Repellers) already under their belts, the Georgia-based crew of Dead Hand have moved on to their first LP, and it's a belter.  Starting off with straining distant guitar waves, insistent percussion, and a muffled vocal sample in "Resign To Complacency", the band takes its time establishing a chilly atmosphere before smashing in with their more energized vocals.  It's a smooth and well-constructed ramp into the subterranean sludge which forms most of the album, and with it, Dead Hand quickly establish their fondness for unearthing new facets of each song with a natural-feeling flow to the changes.  That inventiveness also leads them to try out material the average modern sludge band would be unlikely to attempt, pulling in influences from death and doom for passages both elegant and brutal, in turn and in combination.
"Trailed by Wolves", the album's big-hitter at ~15 minutes of heaviness, feels like the album's best showing of those tendencies, with its numerous drastic musical shifts chaining together; similarly, it drifts seamlessly into the title track, which finishes its run with a focused central riff, as though the eye of the eponymous storm has brought its calm.  That extends into the post-rockish "1/13/12", which at ~3 minutes of measured picking from the guitar feels like a quick bridge by the preceding songs' standards.  Album closer "The Last King" begins by drawing that sedation up by the neck, giving it an almost military march setting before the vocals arrive to herald the coming violence.  It's a satisfying close to the album's various moods, and the album as a whole comes together fantastically.  Probably too dangerous to use as driving music, though.
~ Gabriel