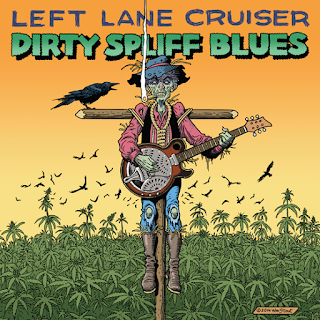 Indiana's Left Lane Cruiser is back on the road, this time with the new album "Dirty Spliff Blues", and as you could of guessed, smoking copious amounts of grass is encouraged.  This isn't your typical blues or stoner rock record, rather a fine mix of the two styles, towing that line over the entire record. Steel guitars and dirt road vocals give way to roaring bouts of guitar distortion and even some fuzz here and there, making for some damn fine, swamptastic tunes. Of the ten tracks on this stomper of an album, my favorite is the middle child. With a title like "Heavy Honey", it doesn't take much to figure out the lyrical subject matter, but that doesn't make the song any less great. Opening up with a twangy, distorted riff, you're immediately infected with the sort of boogie these guys lay down consistently. Seriously, the riff is catchier than herpes. It takes about thirty seconds for the dirty and raw vocals to kick in, adding their own sort of country twang to the mix. Around the halfway point a guitar solo starts up just before the whole thing takes off, launching into a blistering stoner rock tangent before things slow back down and come full circle, with the song trailing off much the same way it started up.
While the album was released on June 16th, there are still plenty of vinyl options to get your pick of, including classic black, and some limited orange (100) and starburst (150) vinyls. And for all of you folks not addicted to vinyl, you can still grab CDs or the digital copy from iTunes.
~Skip