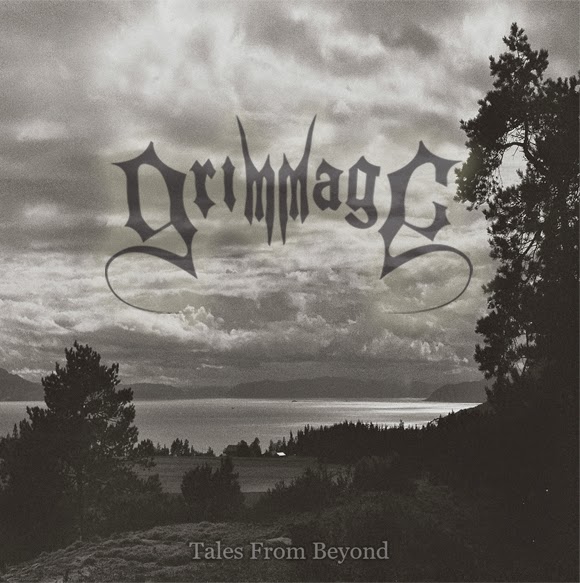 Grimmage have been around since 2012, toiling away in their German homeland, and this release marks the first publically-available recorded works from the four-piece group.  Though it's big and chunky (with each of the five songs somewhere around the 8-to-9-minute mark), they're disciplined enough to only call it a demo, meaning that they'll be hitting even higher once the full album experience lands.
The demo begins by taking off on "Black Wings", cranking up slowly on a fuzzy groove as the guitar sizzles into place and distorted vocals greet the listener.  As the moment builds, the riffs get harder and meaner, the vocalist begins to roar, and things really start cooking, solidifying the track as a strong opener and mood-setter while also establishing an impressive performance range for each of the musicians.  From that promising start, it's on into "Magic Rites" after one last howl of feedback, and the crash of bass which kick-starts the track makes it clear that things are now most certainly on.  Low-mixed horror movie samples add to the pressurized atmosphere conjured up by the band, with development of the vocals into simultaneous clean and demonic (plus echoes) making for a very nice touch on the shadowy sounds.
After the harrowing gloom of "Magic Rites" moves on into the night, "Hunter" arrives to tighten things back up, with precision fills from the drummer, a fat-tubed bass-line, down-tuned guitar, and '70s doom vocals coming together in a perfect storm of old-school heaviness.  "Wasteland" picks up from there with a buzzy riff leading into warm-toned accompaniment, offering a relatively comforting vibe after the unforgiving doom of the previous tracks, though the song does eventually show its dark side.
Finally, "Calypso" finds the group shifting down to a steady and somber pace as they make use of their native tongue, then ramping up to a big and noisy finish.  Again, if this is just the demo, then there's a lot to look forward to as this group moves forward.  Plenty of experimentation, a firm understanding of doom metal in several flavors, and a fondness for monstrous bass; what other temptations do you need?
~ Gabriel