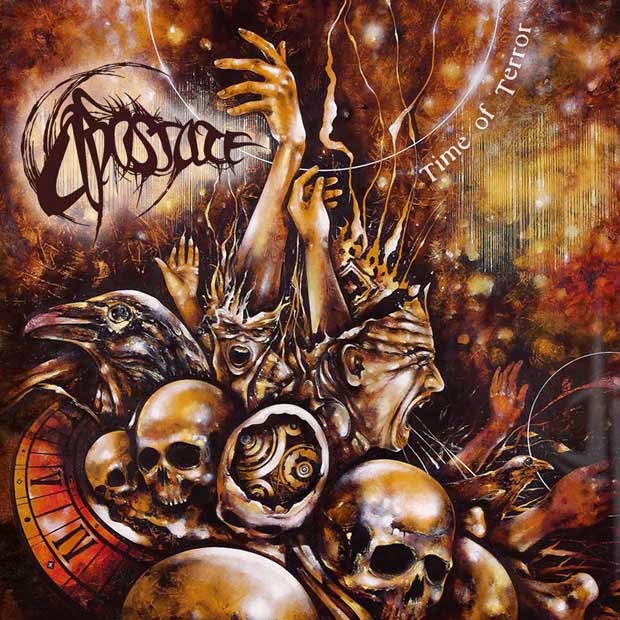 Ukraine's Apostate have an interesting history, with more black metal influences to the material they released in the mid-'90s before their break-up in '98, and their first full album not arriving until 2010, after their resurrection by bassist Alexander Kostko.  Time of Terror picks up the line of heritage with the death-edged, near-funereal doom of "Solar Misconception", crumbling in an assortment of audio samples to add still more to the classic doom-in-a-Hammer-Horror-vein somberness and setting (a practice revisited throughout the album).  Each of the five songs (the shortest of which is just 9 minutes) achieves its own distinct character, with all of the members doing a great job with their performance range, and the drummer in particular doing a fantastic job of parsing out separate rhythmic approaches for each song.
There's a lot of tradition being revived in these tracks, but since the band seems to only be interested in the bands who really pushed things and welded metal varieties into new forms, it's difficult to chalk all of the authority they command up to their past.  They're playing their guts out in the here-and-now, and as they roar along, Apostate make it clear that they're looking to the future when writing this music.  There's too much fire in its bones to be brushed off as a relic, and the ambition the group shows in the complexity of the songs is enough to earn them plenty of new listeners.  High-quality stuff, not to be missed by doom fans who like it slow, heavy, and majestic.
~ Gabriel