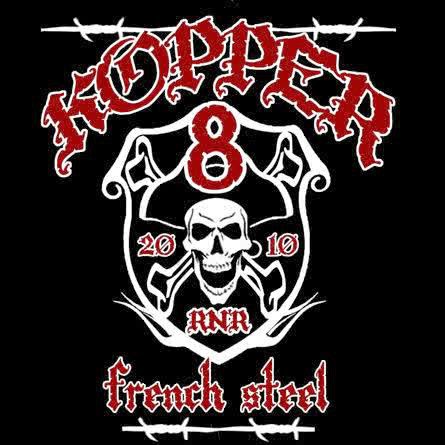 This self-titled debut from French metal band Kopper8 serves as a warm-up for the full-length from which they're already beginning to release singles, and the four tracks to be found here give a good idea of what you should be expecting from the album to come.  If the cover art for the "Requiem" single is to be taken at face value, the band has been around since 2010, hammering out their aggressive Pantera-influenced style, and the songs show the effort that's gone into them.  Pummeling rhythms, guitar with plenty of swagger, and the belted-out lyrics come together with great combo power, though I'm personally hoping that more shredding gets packed into the full album, as the usual chugging riffs can get a little stale without that splash of unrestrained energy.
While the band's decision to sing only in French may be a barrier to non-Francophonic metal-heads out there, the rhythms and hard-hitting chords are more than easily understood, bridging any cultural gap with the power of straight-up metal.  If the days of the Big Four are still fresh in your heart, check in on Kopper8's activities and get a fresh shot of metal up your ass.
~ Gabriel