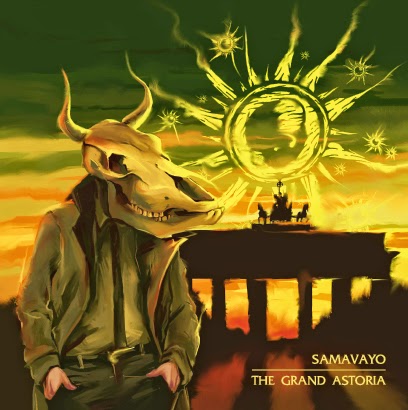 Samavayo open up this split with two tracks on their side of the 10"; first up is "Intergalactic Hunt", which bounces unpredictably on drum pops and careful chord-switching, picking up speed and energy until it breaks out into one of its several heavy break-downs.  Samavayo's other song is "Soul Out of Control", which puts a nice layer of dirty sheen on the strings, cranks up the steady riffs, and introduces the group's vocals to strong effect as the band pushes in more of a straight-forward heavy rock direction.
The Grand Astoria, true to tradition, fill their side with one long track; in this instance, it's "Kobaia Express", written and sung (in the language devised by the French prog rock band Magma) in an impressive act of homage.  From a quietly bubbling start, the song soon grows to incorporate layers of instrumentation and overlapping vocals, as busy as a prog-loving beehive.  There's less of the drone than on some of the band's constructions, as it's mostly restricted to background fluctuations in this outing.  Some wild percussion in the latter half shows The Grand Astoria's teeth, but for the most part, it comes across as a chance for the band to simply enjoy the act of creation.
Both sides are quite enjoyable, as long as you've got a taste for prog rock's indulgences, and it's available as a 10" from Setalight Records, or as a simple download.  However you get it, it's some seriously toothsome rock.
~ Gabriel