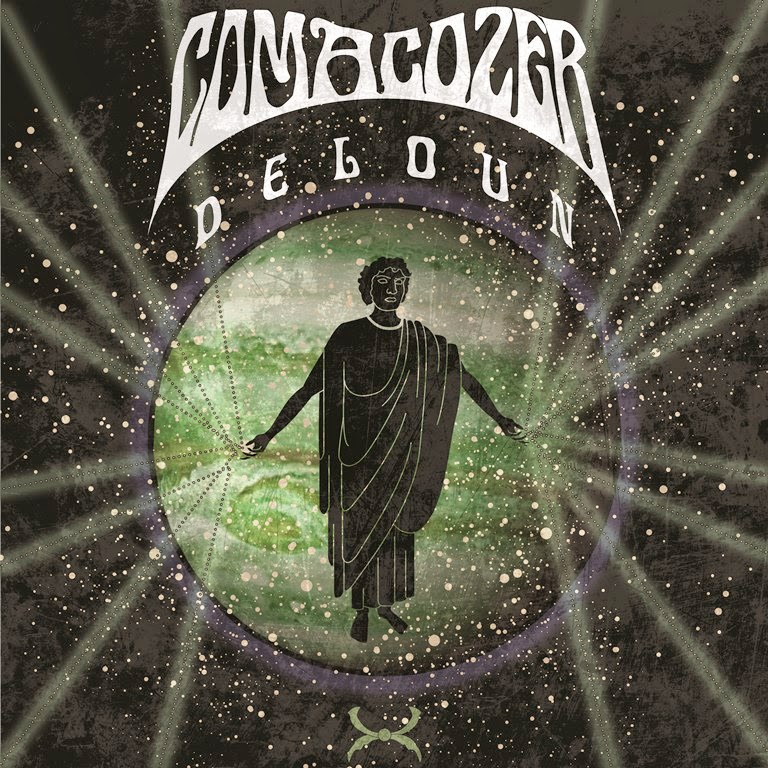 Having been around since 2013, and with a demo released last year, Australian 3-piece Comacozer have stepped up with a full studio EP mixed by Frank Attard (Mother Mars, Frozen Planet.... 1969).  First of the three tracks to be found on Deloun is "Flamens of the Highest Order", a suitably cosmic-sounding 9-minute-plus slab of circling chords, building tension and layer development as it curls tighter and grows heavier.  With this first track, the band shows a clear interest in digging past the main grooves into weirder territory, enough to mark them immediately as a crew to follow with their promise of further fuzz-loving wanderings. Of course, right after that is the ear-resting interlude of "Cosmic Hypnosis", showing that while they can pull off the meditative/dronier side of heavy psychedelic with plenty of panache, it's the more active material that really lets Comacozer cut loose.
"Nebula Dawn" makes for the last of the tracks, merging elements from both of the prior pieces into a new space-age alloy.  The psychedelic side ride rises to the top here, with guitar notes bleeding into each other as the bass bobs along under the surface and the drums kick into fiery beats.  Undoubtedly even better live, where they don't have to sacrifice their jam time, it's a solid capper to the EP and a killer intro to the band.  They'll be playing a few live shows with Holy Serpent in June, so if you happen to be in Australia looking for quality heavy music, don't miss out.
~ Gabriel

For Fans Of;    Gallileous, Bomg, Mares Of Diomedes, Humbaba, Oceans Of Titan