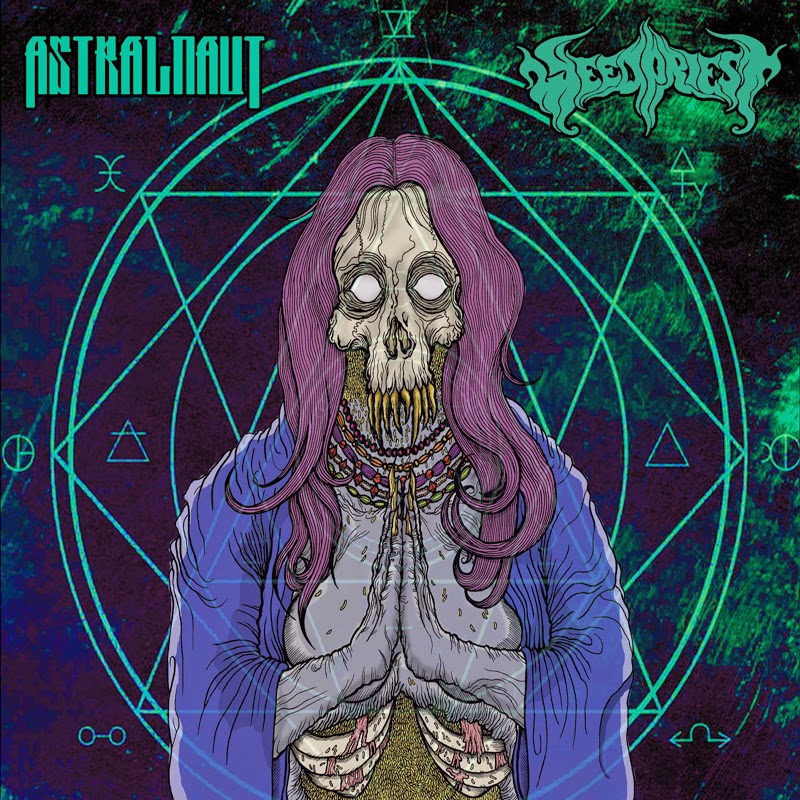 This split marks my first encounter with Astralnaut (though I dig the name, and looking at their BandCamp page tells me I need to get cracking on familiarizing myself with their past EPs and album), but as I was already a big fan of Weed Priest's potent stoner doom blend, I had high expectations.  Happily, I was not let down in the least, as between the two bands and their quarter-hour of low-tuned dark grooves, I had a damn good time.
Astralnaut starts things off, sparking a film sample as they warm up their instruments to rock the dead with "Parasitic".  A muscular main riff carries the essence along while conflict and determination are outlined by the singer's menacing style.  After crossing the half-way mark of the track, Astralnaut open up the valves on their dark energy reserves, letting the strings start to bleed into blurs, the drums pound harder, and the speed accelerate; hell, they even made the cow-bell sound bad-ass, and that's no easy trick.
After Astralnaut slink into the darkness, Weed Priest take command of things, and "Graveyard Planet" rises with some imagery that would be right at home in the pages of Heavy Metal.  A hard-grinding bass groove gets things situated before bringing in the vocals and twisting the chords around, plunging into the hallowed dirt of their setting with killer style.  A squeal into tonal overload, a fading out of the volume, and it's over, at least until you hit play again.
What with both bands being residents of Ireland, imagining the sort of shows these two would put on together is almost enough to get you checking into your passport situation to catch a gig.  Air fare being what it is, though, you'd probably be better suited contenting yourself with letting these tracks (and the rest of each band's catalog) drive their leafy lethality into the core of your brain.  If you need more convincing, just play the EP again, you'll get it soon enough.
~ Gabriel

For Fans Of;    Ladybird, Toke, Dopethrone, Sleep, The Sleer