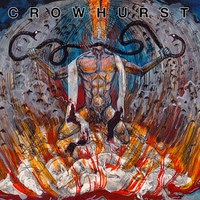 With a countless number of appearances on splits, EPs, and collaborations, and more than a few concept albums, Crowhurst have finally released a self-titled full-length solo LP.  To mark the occasion, they've taken elements from doom, industrial, sludge, black metal, and a few other sources, shaken them all together, and poured out the resulting sticky mixture as a dark and brooding album.  The production walks a fine line between gloss and grime, consistently being adjusted to best fit the material of the moment, and the gloom produced by the band is similarly balanced between aggression and melancholy.  Vocals emerge as shredded screams and suffocated whispers, melodies shift from reflective calm to maddened thrashing, and the audio dynamics practically bungee-jump from highs into lows, and back again.
It's also worth noting that the album effectively avoids one of the largest dangers of industrial doom, that being an over-reliance on automation.  On the whole, the music feels primarily organic, with the electronic details serving as an unsettling enhancement instead of a cybernetic crutch.  All the dirty sound you might expect from blackened doom is found intact, and the occasional howls beyond human capability only emphasizes the strength of the underlying song-writing.
The album will be out April 10th, released on vinyl by Ivory Antler Recordings (it'll also be available on 8-track, for all of you obscure format hounds), and there's talk of a companion remix album yet to come.  For atmospheric and haunting noise, it's quite a treat, so you might want to go ahead and set aside a few bills to pick up a copy once it arrives.
~ Gabriel