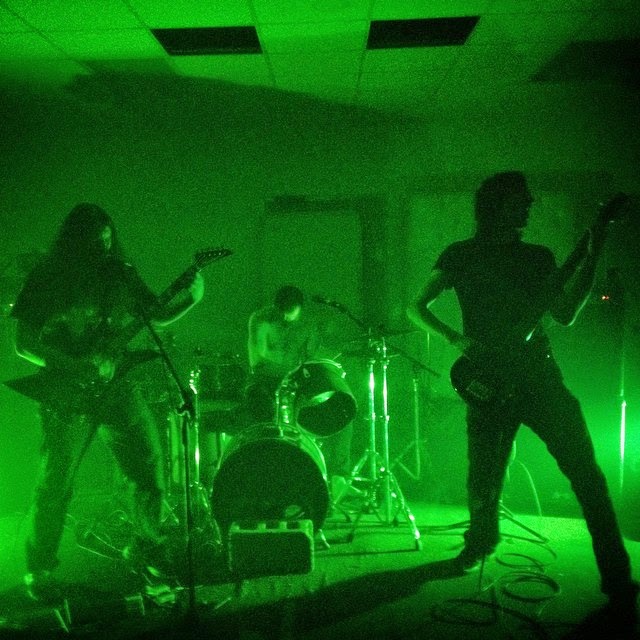 A couple weeks ago boredom dictated that I find something to do outside of my usual routine, after a grand total of fifteen minutes looking around town for something to do, an invitation to a house show came across my computer screen. Local thrash metal heroes AxAttack playing in a house on the other side of town. The room that everything was set up in had mattresses propped up against three of the four walls around the band for a little sound proofing, but luckily the place was in a mostly commercial area, so there weren't many people around by the time things kicked off. There weren't really any opening bands to speak of, just the one man act M, playing a long, intricate guitar piece. With his back to the gathering crowd he slow built up to a crushing torrent of sound coming from the guitar cab. After an intermission and grabbing some beers, everyone packed into the smoke filled room, the lights went out except for the two green lights that were pointed at the band. Opening up with one of their latest works "Beer, Battered, and Bruised" everything was off and running like a drunken bar brawl. It didn't take long for a handful of people to start pushing each other and moshing for most of the song. By the time things zoomed along to the next song, bright flashes streaked across the room and over the band. Like a makeshift pyrotechnics crew, a group of people were in the corner with roman candles, doing their best to miss band members and equipment with each incendiary projectile they sent across the room. Once their supply ran dry they were looking for a new pyro fix, handing out sparklers at first then reverting to a couple bottle rockets when things got dire, after a few more songs. Their EP's title track "Toxic Wasted" was played next to last, with the gnarled vocals clawing their way out over top of the break neck guitar riffs. The bass has a clean and very rounded tone that still manages to cut through the onslaught of guitars and slamming drum parts. They closed everything out with their latest track to be released, "Who the Fuck is Slayer?" included on a split with death metal band Suppressive Fire and their cover tracks from the likes of Thin Lizzy and Black Flag. But with a song title like that, do you really need anymore incentive to go check that one out?
~Skip