Another Trip Down Under 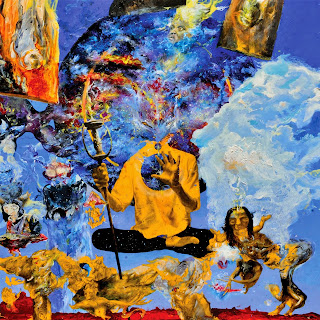 Australia's AVER are back with their first release since 2011's debut album that Jay reviewed back then, and the good people loved. Their latest album "Nadir" was released just a couple months ago and, not surprisingly, has been widely acclaimed since day one. They took the tried and true formula that made their first album so good, refined it, and stepped up their game even further. The fuzz is palpable on this slab of psyched out stoner rock that seems to never stop giving the good stuff, at least not for sixty minutes, then you just hit play again. Always on the move, but never in a hurry to get there, the album is infested with raw, powerful vocals, and heavy melodic riffs that ooze into your ears and slowly start taking over your mind. With the ability to move between teeth smashing heaviness and mellow, melodic interludes with the sort of ease that we walk from room to room with, the album is sure to have something for everyone that's a fan of this blog. After a couple of complete spins, I was stuck on the fourth track "White Lies", and it really drives home that point I was just making. The song opens up slow, some simple strumming and clean guitar playing, but it won't stay that way too terribly long. Picking up a little steam over the first two minutes, the vocals make their appearance at that point. They're blusey sometimes, and can move their way into grunge territory without any notice really, except for maybe an incoming fuzz riff. That's the beginning of a recurring pattern, melodic lulls with massive, hard hitting peaks. With most of their songs having that peak and valley pattern to them, "White Lies" included, you find yourself getting lost inside each and every one of them, the almost ten minute run time of a lot of the tracks probably doesn't hurt that cause either. And seeing as how the album's title is referring to a low point, or valley, it all fits together just perfectly. If you didn't discover their first album until a couple years later like I did, this is your chance to get in on the second album right now, don't pass it up.
~Skip


For Fans Of; Nebula, Dozer, Sungazer