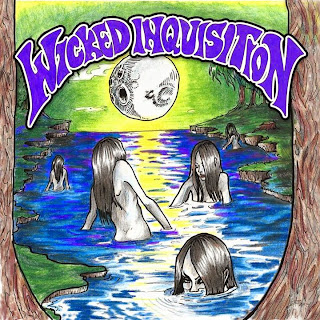 After seven years and two EPs, Wicked Inquisition have finally released their first LP, with an evident good use of the time spent getting to it.  Things are brought up to speed in short order by the opening track, "Black Magik Nacht", putting pummeling riffs and matching drum-beats to work with touches of '80s gusto to give it some extra juice.  A little bit of a tempo drop eases you right into "Crimson Odyssey", and the group gets a touch more open about their appreciation for powerful heavy metal as the vocals rise up more dramatically and the guitar goes a touch more symphonic with the chording.  It's this blending of styles that forms their focus for the rest of the album, with traditional staples like nuclear war ("M.A.D.") and man's inevitable doom ("In Shackles", "Death Of Man") mingling with more upbeat material ("Sun Flight" and "Tomorrow Always Knows" with its cheeky Beatles tap).
A capper comes in the form of Wicked Inquisition's self-titled track on their self-titled album (ding ding ding), which condenses the mood of the album into one thoroughly-solid last shot.  The unity of the album from start to finish stands out more with each revisit, and the group has really out-done themselves with putting together a first album they can still be proud of years later.  Check it out if you like traditional heavy metal, moreso if you like hearing it with some experimental twists.
~ Gabriel