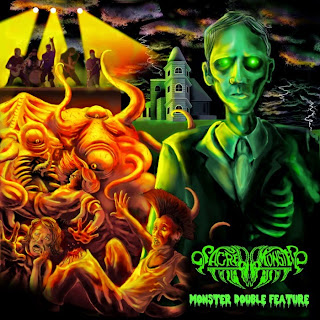 The Chicago-based quintet of Sacred Monster have been kicking around since 2011, though they only released their first EP early last year.  They've taken a bit less time to get this follow-up out, so everyone who had their ears tickled by the first one will find more gnashing and bashing to suit their tastes by the two tracks of this Double Feature.  First up is the Lovecraft-inspired "Charles Dexter Ward", a howling rendition from the POV of the tale's ancient sorcerer as he plots his revenge and other nefarious deeds.  A hard riff lays the main groove, which takes off as SM hits the solo, bleeds off into a trailing note, and slams back in to close it out.  "Bum Knee" skews a little bluesier with its style before the vocals storm in to transform it to mosh-mode.  They somehow mix the blues and bloody noses together in working fashion, with the energy and humor put in by the band-mates serving to gel it further.  The two tracks play off of each other in a lively way, and the EP, though quick, serves as a nice demonstration of the band's capabilities.
~ Gabriel

For Fans Of;    Dead Hand, Repellers, The Hyle, Yanomamo, Lords of Venus