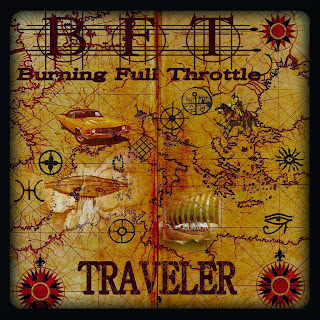 Two years after the release of their first album, Burning Full Throttle are back with another, this time putting some extra spin on their characteristic hard stoner rock sound.  They hit the road rolling with "El Camino", which tosses a couple of nods to Steppenwolf's "Born to Be Wild" before burning off towards red-eyed horizons and the rest of the album.  Kicking hard on all fronts, with belted-out vocals wailing over the bang of the drums and the guitar/bass fuzz-fronts, the band tears into and through its songs with a gleam in their eye and fire in their back-pockets, rarely settling down more than a slow rock stomp.
With five of the eight songs on the album in the 4-5 minute range (and two of the remainder drifting less than half a minute further), BFT packs the riffs in quick, jams out as much soloing as they can get away with, and hits the next one while you're still processing the last one's hooks.  They've really captured that New Mexico desert road with exceptional clarity for a band all the way over in Hungary, and while there are a couple of down moments (the Cookie Monster vocals of "Desert Monster" probably take the position of prime offender, even if it is done as a joke), the album as a whole stands pretty firm.  Best enjoyed with a window cracked to let the smoke rise out over the asphalt.
~ Gabriel