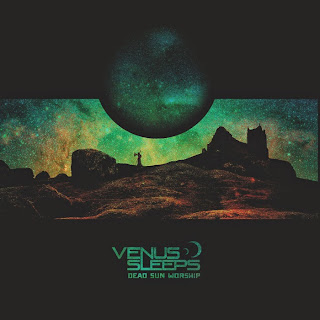 A little over two years since the release of their demo, Ireland's psychedelic doom quartet of Venus Sleeps have returned with a full album, packing near three-quarters of an hour into the space of five songs (including a cover of Syd Barrett's "Golden Hair", turned to much heavier ends than could have been imagined back then).  From the solar wind opening of "Ether Sleeper" to the trailing strains of "Age of Nothing", Venus Sleeps show dedication to making their brain-loosening riffs and low-end assault sound as good as they can.
The bass gives you enough reverb to start swimming on air if your stereo's loud enough, but there's a crispness to the mixing that lets it co-exist with the higher registers of everything else without crushing the life out of them.  The guitar gets so psychedelic at times as to pass for a wildly-modded synth, and well-used echo effects on the vocals let them sink right in to the crushed-velvet mind-trip, guiding your ears through the maze of amps and tones as the music unwinds.
Extra-high praise goes to the drummer, Fergal Malone, who handles all this madness with a relaxed air as he injects the propulsion keeping the tempting lethargy of the slow grooves tempered.  No matter how much drone or ring mod is thrown his way, Malone fires back with something that plays right to it, taking a well-earned breather with the spaciness of "Golden Hair" towards the album's center.  Despite the length of the songs, the album glides right along, and if not for it throwing off LP-fitting once this album makes it to vinyl, I'd be more than happy for a few more songs to keep Dead Sun Worship going.  As it is, the band has me roped into needing to play this over and over, getting familiar while anticipating their next release.
Definitely one to pick up for fans of psychedelic doom, it's currently available on CD or download from Venus Sleep's BandCamp.  Venus Sleeps also has a show tonight, so if you happen to be near Dublin tonight, get yourself over to Tenterhooks without fail.
~ Gabriel