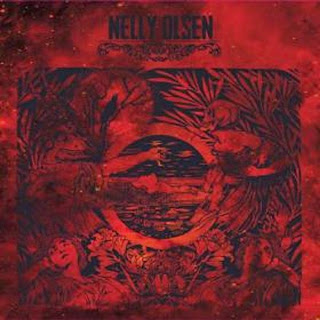 With cryptic song-titles and a pressurized depth to their music, Nelly Olsen (who've been leaking out singles since the end of 2013) finally released a full album back in November, more than meeting the expectations set by their harbinger songs.  Beginning with the warming rays of "Disharmonious Sun", NO build up thick skeins of notes before blasting them into pieces, just to go on and rebuild from the jagged remains; by the time of the second song, "Nightwolf Schizophrene", they're well and truly on a rampage, smashing through riffs just as quickly as they can be cemented.  It's a stunning display from the band, and the restraint they show in the quick drop down to "Self-Deception" (right about where side B of the record would begin) is enough to give you audio whiplash.
After "Self-Deception" gets its feet on the floor, it rushes head-long into the spinning gears of Nelly Olsen's musical machinery, getting chopped to pieces but picking itself right back up each time it happens.  Instead of trailing quietly off into the night, "Devil's New Boots" ends the album by roaring off with all cylinders firing.  It's an impressive performance, and easily popped retroactively into 2014's Top 20 list; if you haven't already heard it, Negation Records and SM Muzik are handling the release, so send all of your demands for a physical copy right their way.
~ Gabriel