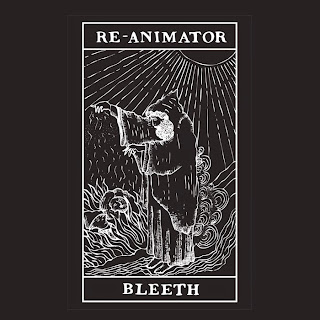 Miami may not be too high on the list when you think of doom metal meccas, but Bleeth are doing their part to improve its standing with their new EP, Re-Animator.  From the opening howls of synth feedback and hard-cutting guitar in "Waste", they've got a distinctive sound, furthered by the thrashy pace of their drumming and the harsh edge to the vocals (supplied by both the guitarist and bassist).  The bass comes in at bone-buzzing frequency, and between it and the guitarist's pedal control for atmospherics, they make the slow sections work just as well as the spine-cracking speeds, giving them a range of options and moods to build from on subsequent releases.  In the here and now, though, their mix of sludgy grime with the grounding of doom makes for a strong debut with plenty of riffs to get lodged in your ears.
~ Gabriel