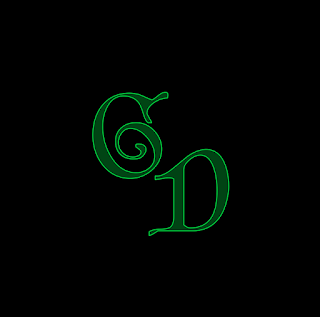 As Green Druid admits on their BandCamp page, the only reason this isn't an album is because they didn't want their first LP to only have three songs.  Big, heavy, and steeped in doom, those three songs get readied by the atmospheric "Nightfall", which at just three minutes is a quickie by the standards established by the rest of the EP.  With distant bird cries, the sharpening of a blade, and tension from strings and synth, "Nightfall" sets the darkened mood with a deliberating hand, and the breaking-in of more typically doom metal bass fuzz with "Ritual Sacrifice" comes as a good shake to the senses.  There's a near-blackened texture to the venom in their buzzy feedback, into which the singer sinks his voice like a body into a swamp, growing less intelligible and more frantic as the end approaches.
"Rebirth" cuts in from there with a somewhat-faster amble to its wide-loping riffs, keeping the vocals at a reach but reducing their submersion a touch.  Think early Black Sabbath covered loosely by Cough, and you'll be near the same impression the song gave me.  Lastly, "Cursed Blood" spreads its wings over half of the EP's ~40-minute run-time, taking the blueprints of the other two biggies and expanding from there.  The band throws themselves into it with a focus of purpose, and for their first release, it's exceptional.  Thinking ahead to how crushing their full album will be is a little too much to handle, so just enjoy this monster EP for what it is.
~ Gabriel