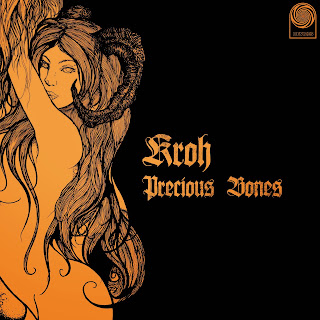 Originally formed in 2011 before breaking up the following year, Kroh have reformed themselves with this new single, which has the B-side of "Heaving Earth" to go with the title track.  "Precious Bones" sets the tone with down-dropping tones and percussive vortices as the vocalist lays on the drama with her delivery, crying out unsatisfied desires as the instruments grimly soldier on.  "Heaving Earth" injects a crunchier vibe for the bass and guitar, with the drummer continuing his strong performance and the vocals going slightly more aerial.  As an introduction to the band's new line-up, everyone gets a clear representation while also defining the sound they're going for, so if you have a taste for doom rock, you might want to give them ten minutes of your time.
~ Gabriel