Blood of the Mother - The Mother and the Neue Maschine (2014) 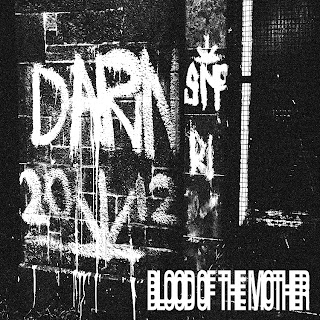 This album marks the first release from Glasgow's Blood of the Mother, and while they may be new, they're already dab hands at putting together heavy layerings and twisted progressions.  The first of the four evocatively-titled tracks on The Mother and the Neue Maschine takes an interesting curve to atmospheric sludge, dropping lo-fi elements into more richly-textured pieces for high contrast and successful ear-invasion.  "Womankind Is Kinder Than Mankind" leads listeners to a slower and more meditative setting, letting the strings resonate over slow drumming as the vocals quietly intone words of travel and identification before a wave of violence overtakes it and destroys itself.
As "Corpses of Lost Ideas" leads into the second half, the violent and wintry sounds come together in a more massive fashion, hitting an expansive projection that feels like it could fill the depths of a strip-mine.  After bleeding itself out, "Death in Kentucky" approaches with softer tones again, keeping a subtle edge going beneath the guitar's throttled notes, seducing your ears into complacency before launching the last volley.  A sound-clip that can't help but date itself already puts a little bit of a damper on the end, but in general, the release is a pretty fantastic first work.  There's variety, imagination, an expressiveness with the instruments that's downright devilish, and a considerate crafting for each individual piece.  Check it out if you like hearing sludge and doom being burned down to the bones.
~ Gabriel

Blood of the Mother - Corpses of Lost Ideas (320 kbps)