HEAVYDEATH - Awakening of the Forgotten (2015) 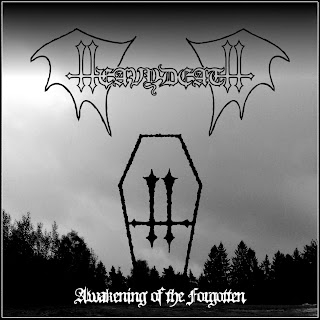 The ever-productive Heavydeath are back again, this time with ~20 minutes of material both old ("Awakening of the Forgotten", a reworking of a track from one of the numerous demos) and new ("Steel from Beyond", "Old Dust Alive").  The group's blending of death and doom is as satisfying as any previous release, but with a little more warmth and richness to the recording, and less of the crypt-studio feel (though I still found myself shivering for some reason).  The way the bass and vocals play off of each other is where it feels the meat of the songs is residing, with the guitar's sharp buzz acting as a scalpel to carve things up just as they start to settle in, and sometimes going a bit mad with the slashing.  "Old Dust Alive" really hits a nerve with the distortion effects, so even being the shortest of the three tracks, it gets under your skin and creeps into your bones.  If you haven't already given Heavydeath a listen, this is a great place to start; if you have, it's just more to appreciate, and gives a good sense of how they've adjusted things since the days of the first track's original recording.
~ Gabriel

HEAVYDEATH - Steel from Beyond (320 kbps)