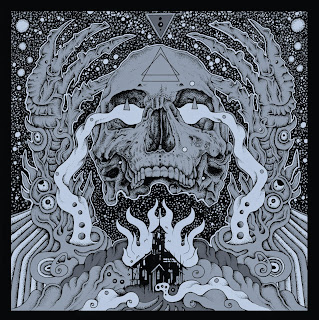 Ssanahtes are a new five-piece from France, and with a stated allegiance to Electric Wizard, Neurosis, and NOLA sludge, their debut EP starts things off on a deeply heavy note.  First of the four tracks is "Blue Druidess", grinding out the bass groans while the percussion clicks and rolls out a net of tricky rhythms, and the guitarist's twists add a dark ethereality to the web.  Ssanahtes wait until the second song, "The Edge", to bring in the vocals, which live up to the harshness expected of NOLA devotees once activated, rising to meet the challenge of the massive instrumental resonance.  "The Edge" also lets the guitarist show off his aptitude for shredding in solos, with care taken not to over-use it.
There's more of a sludge-punk feel with the next track, "Black Dragon", a relatively quick one which puts a slowly-bouncing pulse into effect at the start, sure to coax even the most out-of-it concert-goer into wobbling back and forth in approximation, before cranking it up and tripling the pace.  "Words" closes it out, with the band returning to a slower form of crushing as they pour on the bassy reverb.  All around, there's a healthy variety to Ssanahtes' virulent sludge, and enough tangents or feedback blaring they can take with the songs at live shows to make it worth a visit if you can catch them touring.
~ Gabriel

For Fans Of;    Neurosis, Baroness, Thou, Kylesa, EyeHateGod