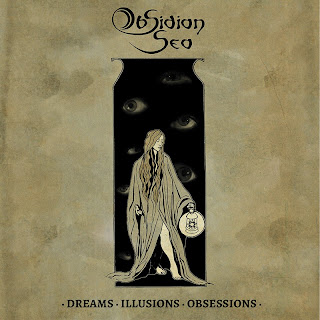 Obsidian Sea have been around for a good six years now, and on their latest LP, they delve into "dream-worlds and psychotic states" for musical inspiration.  "The Trial of Herostratus" begins the album with a big bass crash, quickly joined by a crunchy metal riff from guitar, and the drums drop in with a bang that can make you jump if you're not expecting it.  The dramatic delivery of the vocals and the grandeur of the rising progressions gives things a nicely-utilized edge of prog, enough to buck expectations without going into over-indulgence, and the band flows smoothly from one morbid cadence to the next.  There's very much an '80s sort of doom flowing through their veins, with an emphasis on the music over the production and a mostly-serious attitude backing the lyrics of starry skies and suffering.
One to check out if you like your doom to play it big but thoughtful, Dreams, Illusions, Obsessions is available on CD and download directly from the band, while cassette copies are being put out by Serpent Eve Records.  Get yourself a copy, turn it up, and become a menace cruising the streets as the songs pour out of your car windows.
~ Gabriel

For Fans Of;    Kalamata, Possessor, Below, Candlemass, Black Magician