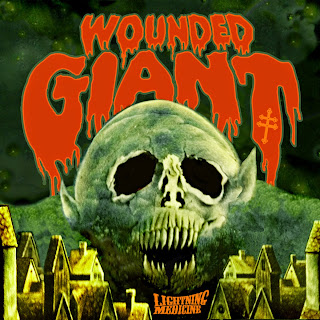 Even though Wounded Giant's first LP "Lightning Medicine" has been out since 2013, it's getting a new breath of life thanks to Black Mess Records and a super deluxe vinyl reissue. For those unfamiliar, Wounded Giant lays down a thick groove of classic doom metal that's laced with a big dose of psychedelia just to make things interesting. They don't sound quite like anyone else, managing to put yet another spin on the timeless doom metal sound, leaving it feeling fresh and new. The guitars just obliterate and crush everything in their wake, with the smooth vocals striding in right behind that. The drum rhythms feel like their something out of an old tribal drum circle at times, seeming to go their own direction but still fall in so nicely with the rest of the track. The album ends on the title track and it's a supremely heavy exercise in doom, with a rolling drum intro, that's joined shortly by a fuzzed out doom riff. Around halfway things devolve into a jaunt through sludge territory, but start to regress after a skull bludgeoning few moments. By the time you've gotten to the last couple minutes of the album, things slow down even further to a snail's pace. This is where a heavy bout of psychedelia sets in, with spaced out sounds that wind the album down in a psyched out daze. Black Mess Records is the party responsible for getting a vinyl version of this gem made, including a special edition set of 50 colored records that comes with an "herb" jar and leather patch, of which 8 remain at the time I typed this, so you still got time. If you don't need all the extras, they have have a regular edition of the record for sale also.
~Skip