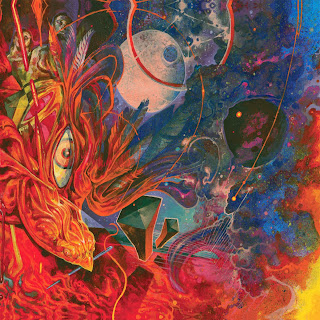 Being officially released today on Small Stoner Records, the latest heavy psych opus from Abrahma continues their tradition of heavy rock with huge doses of psychedelia mixed in the batch on "Reflections in the Bowels of a Bird". An album of epic proportions, and clocking in at just under an hour, it's easy to get lost in this one. When it's not lashing out with heavy riffs that infect your mind, it's a slow ambiance that makes you think you're floating in the great black ether of outer space. With that being said, those passages are never too long and drawn out, always seeming to end at just the right moment. That's usually when the riffs start up, like being greeted with a heavy slap to the face that you thoroughly enjoy. While there isn't a bad song among the ten that call this album home, it does seem to go down better as whole. The whole record has a very fluid movement from track to track, and breaking them up seems to detract from the overall vibe that the album provides in its entirety. I got into the fifth track "Omens Pt. 2" especially, catching myself hitting the "back" button more than once when it ended. Even though it's a bit different from their normal song formula, it provides an excellent segue between two tracks that are absolute beasts. It starts off slow, with a spacey psych vibe reminiscent of Pink Floyd, from there you venture farther into space before hitting a black hole of sorts, as it sucks you in even farther. Just a bit before the halfway point, a howling guitar riff opens up and then starts to fade away not long after. The vocals in the beginning are almost whispered and never get past that volume really, except an airy scream or two just past halfway, about the time that the saxophone part starts up. That sax and the spacey psych sounds that accompany it are what carry you all the way to the end of the track, and seems to meld in flawlessly with the beginning of the sixth track "Kapal Kriya", going back to what I said about the album is best when taken whole and not pieced out track by track. Starting today, you can go grab copies from Small Stone Records or Abrahma directly, depending on where you are in the world.
~Skip