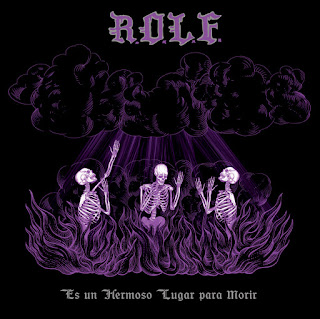 With a collection of releases reaching back to the band's demo in 2010, R.O.L.F. (Remembrance of Lysergik Funeral) put out their first LP (American Tape) in 2012, and with the time since then, they've been hammering out the tracks that appear on this new one.  Those songs rear up with a snarl and fists lashing, with the quick'n'dirty sludge of opener "La Fuente" providing an initial salvo that puts a few holes in your ears to let the rest in with ease.  The smoggy coating keeps most of the music firmly rooted in that initial sludge base, but there are also some moments where they pull back a little bit to show some more melodic and less 'bash your brains against the wall' ways to handle the anger.  These less jolting grooves help get the grit down, and the times when they go at mixing the two directly (as when a bright cowbell opening gets snuffed by a gurgling growl in "A Cuchillo", only to lead into rising chords from the guitar, brutal to tuneful) show a band determined to keep things from getting stale.
For a second album, there's a lot to appreciate.  The band has a clear fix on their main style, but they're letting it grow organically into some other areas, trimming it back when it doesn't work and following with curiosity and an open mind when it does.  CD copies are already available for order, and the vinyl release is scheduled to go up tomorrow, so if you want some sludge with surprises drifting under the surface, give this trio your attention and don't mind the bruises.
~ Gabriel