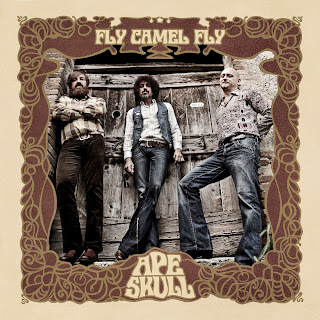 Ape Skull's first album (which was on Heavy Psych Sounds, just like this one) came out just a couple years ago, but they're already back with another full-length, done in just one recording session but without any compromising of their style.  The nine songs to be found on Fly Camel Fly are largely in the stoner rock style, though they do mix it up a bit with touches of blues and psychedelic to keep listeners from feeling like they know how it's going to go.  Warm string tones and fuzz amps help bring the band's love of the early '70s to life, with songs such as "Early Morning" and the title track radiating a sunny friendliness that shows the band's skill at mixing heavy and upbeat vibes.  The guitarist's knack for stretching and twisting the psychedelic off-shoots leads to some savorable sweetness, though the band does take care to keep things generally compact, with only "Fly Camel Fly" itself breaking five minutes.
Similarly, the vocals have a high-soaring quality, but never really over-reach or over-stay their part in the songs.  Mad fills, bridges, and backing from the drummer give the music's sleepy-eyed smile some percussive caffeination, sometimes moving into an off-beat swagger that's cool and infectiously enthused, and the band-members do a great job of enhancing each other's performances without being too obvious about their props.  Music for good times, heavy rock with an honest-sounding love of its influences, and a title that'll have fans scratching their heads for years to come; Fly Camel Fly is an early pick for this year's Top 20.
~ Gabriel