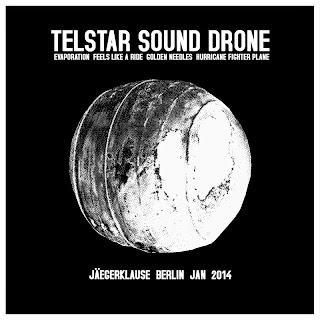 Telstar Sound Drone's first album landed in 2013 (our full thoughts on that one can be found here), defining the band's incredibly heavy and psychedelic sound with its space-warping power.  The band is still hard at work on the follow-up album, which we're told will be arriving around the end of this year, but in the interim they've released this four-track live EP to tide over the slavering fans.  In addition to three of their own tracks, done up in lavish form, they've included a cover of "Hurricane Fighter Plane" (which I'd come to associate it with Alien Sex Fiend, given how many times their cover showed up on Cleopatra Records compilations, but now find is originally attributed to The Red Crayola).
Rich resonance, vibratory feedback, and echoing vocals give the music its primary characteristics, and while the audience is largely swamped out of audibility by the tornadoes of sound, they voice their approval enthusiastically in the moments between songs.  Fans of the band will be happy to find that all of the usual magic is there, plus a little extra improvisation to go with the setting, and those who haven't dipped an ear into the act yet will find this a nice place to start.  Either way, Telster Sound Drone are doing just fine out there, and though the EP is currently digital-only, you can certainly let Bad Afro Records know if you feel it deserves physical release.
~ Gabriel