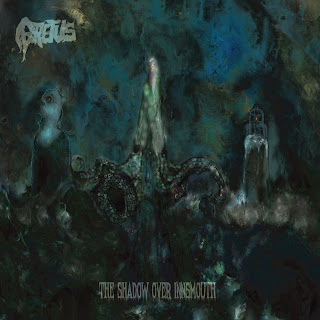 I've always got a soft spot for metal with Lovecraftian themes, so getting a full album built around one of his stories is a rare treat.  The Shadow Over Innsmouth is the latest release from Italy's squad of Bretus, and while there's a lot of traditional doom metal to the base of the music, the psychedelic under-currents to be found in the freedom of the guitar's riffs and tone-twisting provide an alien influence well-suited to the album's setting.  The lead melodies are heavy but catchy, putting me in mind of early Black Sabbath filtered through Candlemass, with dramatic vocal outbursts such as "Human sacrifice!" to give you a good jolt of spookiness.
Instrumental stretches provide noodling and slow doom riffs in near-equal measure, getting around the problem of possibly taking themselves too seriously/grimly by letting the music have fun while the singer keeps a straight face, vocally speaking.  They've got a melodic side that they let shine a few times with pared-down interludes, but the big bass presence dominates Innsmouth like shadows in the water, never letting things get safe for too long.  The climactic tracks deliver a satisfyingly wild rise of action as the narrative's chase ensues, with the conclusion growing naturally out of the album's established themes.  All in all, some very well done doom metal with enough homage to tradition to satisfy purists and enough experimentation to draw in those who haven't previously explored that style.  CD and vinyl copies will be available through Bloodrock Records, with a digital download option already live to be enjoyed.
~ Gabriel