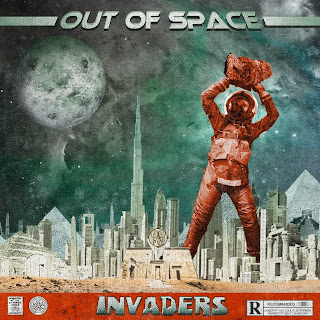 This half-hour EP is the first release from the three-piece French group Out Of Space, and while the names could just as easily belong to a tribute band for The Prodigy, OOS buckle down and play some spacy psychedelic rock with a hard stoner edge to introduce themselves to our planet.  They begin with a trip down "Bloody Road", throwing out ear-snagging riffs and hooks with ease as they plow through the dirt, and it'll quickly either get your head moving in time with the beats or wake you up enough to start doing so.  "Lined Coin" drops in with a slower, bluesier (but still very fuzzy), and generally more '90s-tinged spin, letting out some bleary blaring from the guitar as the drummer holds it down.
"Psycho Jake" and "Riot" form the last of the first half, exploring the psychedelic grunge territory further before it's on into the ~16-minute "Desert In Bloom" for the finish.  The final song starts out slow and very spacy, letting the vocals and drummer set the scene before the guitar slides right in with a buzz and a grin to help things grow from there.  By the end of the track, it's undergone so many alterations that you'll have to strain to remember the start, though they make it all flow together like water.  All in all, a great EP for fans of heavy/stoner/psych/space rock, and a very nice beginning for the band.
~ Gabriel