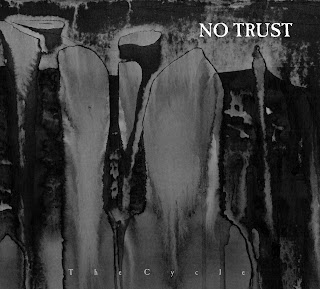 After the late-2013 release of their first LP, Unfound, the sludgy duo of No Trust buckled down to work out some new material, and this resulting album will be released in just two more days.  What you'll hear once you get the chance to grab your own copy and fire it up is a highly aggressive blending of metal styles, with an emphasis on sludgy death underscored by doom-accepting pushes of (very) heavy melody and big bass presence (and to my ears, some blackened harshness also joins the fray).  For a two-piece band, No Trust generate an impressive amount of noisy belligerence, with cascades of percussion and grimy guitar serrations tearing away almost as soon as you hit play.  Meanwhile, the vocals come in with a savage assault, though the band has a good ear for when to back off, ensuring enough restraint to keep the impact of their vicious guttural nature landing firm.
No Trust show a strong command of their music in all of the different ratios into which their genre-mixing fury is distilled, covering the 'seize you by the neck and shake you' blitzes, the 'let's fuse your spinal segments' slow sludge grinds, and the 'gnash your teeth to bloody pegs' abandonment with damn good commitment to pushing each form out to well-deserved extremes.  There's very little of that inadequacy you can get when a band too firmly rooted in one style tries to throw in an failed experiment past their ability/familiarity to land; No Trust pull off all the varieties with fire in their veins and a death-grip on the execution.  In short, if you like your sludge with a big splash of death (or if you don't, but have any amount of curiosity about that combo), get yourself a copy of The Cycle.
~ Gabriel