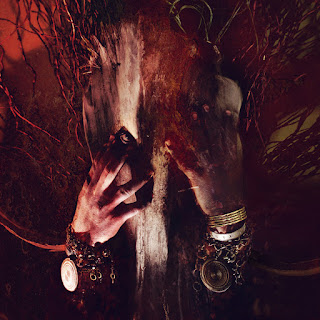 Up 'til this point, Uroboros have put out a couple of EPs, a live session, and a split to keep listeners sated with their sludge, but the Argentinian duo has finally let loose a full album, clocking in at exactly 45 minutes of smashing drums, saw-blade guitar, and their voices (with guests on a few tracks to throw in some curve-balls).  The music shifts between heated assaults and wintry atmospherics, putting black metal rawness and spine-twitching thrashiness to work in near-equal measure, jabbing with the chords and stabbing with percussion before slipping in something down-tempo for a moment's peace.  The band's fluidity in sliding from one sort of crusty carver into another is impressive, and the incorporation of various musical modes (even if just for a quick switch-up) gives the album a well-rounded set of grooves on which to roll.
On top of that, there's clear care in making sure that the songs flow well from one into the next, no matter how drastically different their energies may be.  That fusion comes to fullest fruition with the closing track, "Mecanismo de Antikythera", in which rattling beats, subdued synths, spoken-word samples, and more come together in a twisting cornucopia to provide conclusion. Altogether, Deiphagomega is a fine album, worthy of the high standards set by Uroboros' earlier releases, with plenty of meat on its gnarled bones.
~ Gabriel